What are Some Differences Between Addictions and Eating Disorders?

One thing that I would like to start off and say about sugar addiction and food addiction is that I prefer to look at them as behavioral disorders rather than weight-related disorders. And I think that a lot of people tend to confuse them with weight-related issues or at least try to measure recovery based on pounds lost.

I know that thinking is very popular in some of the 12-Step movements and I definitely want to support people and root for people that are in their quest to be their best selves. I genuinely want that for people. But do not confuse weight loss with food addiction treatment, they are not synonymous.

This is a major source of split between these two communities. A lot of the work that I'm doing is to bridge this gap because I'm an eating disorder dietitian, a food addiction researcher, and a clinical practitioner who sees people across all of these spectrums.

I am somewhat “fed up” with the fact that efforts in these areas not only are separate, but they seem to be upset with each other and even at war with each other. Currently there isn't a good collaborative process and I’m trying to put an end to that.

I'm well versed in both. The eating disorder community looks at me like I'm a little bit suspicious because I've written ten papers on sugar addiction and food addiction, and they're like: “well, we don't do that over here. What's going on with this guy? What is he really saying?”

And then in the food addiction world, people look at me like I'm not really a part of that movement because I'm actually talking about eating disorders, ending diet culture, and addressing weight stigma.

What is wrong with people today when some are so “black and white” when it comes to treatment? The energy in the nutrition field is so tribalistic that someone couldn't actually be interested in the intersection of these issues and seeing where people have both of these problems, where they converge, and where they diverge. It's been very frustrating for me to have conversations because it seems like people either do fall into one tribe or the other. I believe this split is causing harm to clients and patients, particularly for people with binge eating disorders. 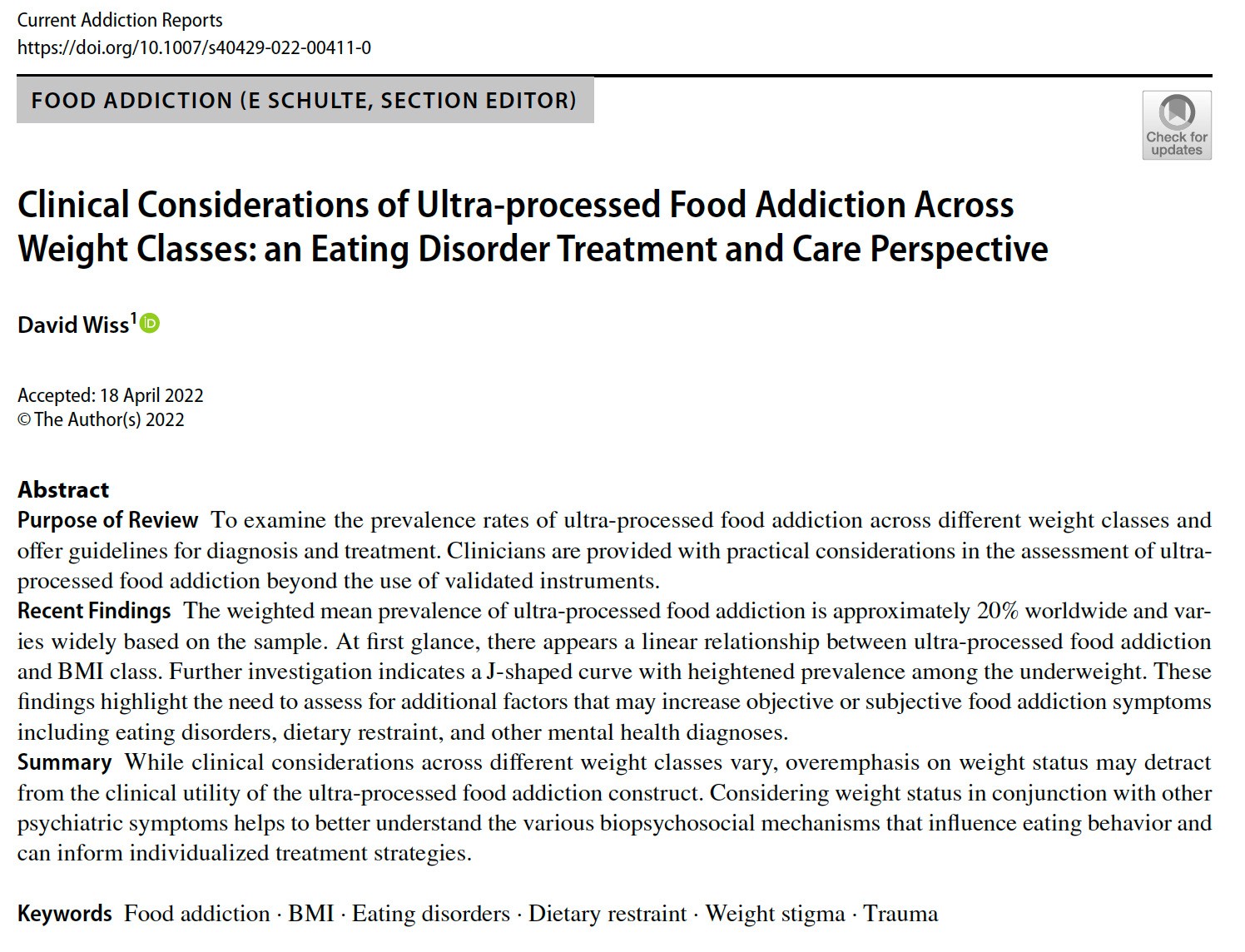 This paper was published in April 2022 in Current Addiction Reports. One of the things I did in that paper examined how food addiction correlates with BMI. We know that in higher BMI classes food addiction prevalence tends to go up. The worldwide prevalence of food addiction based on studies using the Yale Food Addiction Scale (YFAS) is approximately 20% [2].

And so the findings from those studies (and one of the main points of the paper) was that a lot of people who have a long history of dieting and internalized weight bias, who are restrained and deprived (therefore underweight) are actually perceiving more food addiction symptoms than they actually have because the questionnaire is asking about the experience of loss of control with foods such as pizza, cake, and cookies.

And so oftentimes people in that lowest weight category are reporting high YFAS scores because they have internalized fear around these foods, in other words, they have a subjective experience with food that is skewed.

They're reporting high scores on the Food Addiction Scale, but it doesn't actually match what they're doing behaviorally. In research, we use tools to learn about people. But even tools can be imperfect. You need to take the information from the tools and sit down with someone. You could use your Yale Food Addiction Scale and collect information about someone, but then there might be a need to go one step further and actually ask interview-style questions about some of the individual items (to explore further).

One of the findings from that paper is that there might need to be different considerations for those that meet sugar addiction criteria in different BMI classes. It doesn't mean that there aren't people that are hardcore true “biological sugar addicts” that met the criteria for anorexia nervosa because of their sugar addiction. That's one possible direction.

But then another direction would be someone who's truly someone with anorexia nervosa, but then developed perceived symptoms of sugar addiction and food addiction based on their body image disturbance.

One of the things we used to say in addiction treatment is: how can you make a psychiatric diagnosis of someone who just got off eight years on the street using crystal meth and heroin? They’ve been on the run, not taking care of themselves. They've been on hard drugs, and alcohol and they're coming into treatment.

How can they sit down with a mental health professional to assess their psychiatric status when we haven't even stabilized them and got them 30 days of good food and good sleep and some water and some sunlight?

So the argument we made early on is that we need to address nutritional deficiencies before psychiatric diagnoses can be made. And that's important.

And I would say for people that have a long history of dieting behavior, we need to actually address potential nutritional imbalances before we can actually come to any real conclusions about what someone's actually dealing with behaviorally.

I also believe that in order to come to a really clear consensus about someone's status as a “sugar addict,” “food addict,” or a person with an eating disorder, it's imperative to stabilize one's relationship with their body. This is part of how we treat bulimia nervosa and other disorders of eating.

So my goal is to bring the bigger picture of mental health into all these conversations, especially the biological conversations around sugar addiction, and the neurobiology of addiction. I'm trying to get people to lean into thinking more about context: other mental health diagnoses, the role of body image, weight stigma, etc.

If you think this conversation is important and resonates with you, please share the knowledge with someone else who would benefit from it. If you have a health problem and think nutrition may be a part of the solution, Wise Mind Nutrition is here to provide ongoing support.